Since 1957, the Ghanaian has celebrated, annually, the victory of having gained freedom from the rule of British (Empire)—Ghana became the first of the countries in the South of the Sahara to climb the pedestal of independence. The background of this achievement spelled the end of colonization, yet the Ghanaian still speaks local dialects interspersed with English Language.

FREE THE LANGUAGE OF THE GHANAIAN FROM THESHACKLES OF COLONIZATON: A Lamentation

Since 1957, the Ghanaian has celebrated, annually, the victory of having gained freedom from the rule of British (Empire) — Ghana became the first of the countries in the South of the Sahara to climb the pedestal of independence. The background of this achievement spelled the end of colonization — that colonization had been nailed to the tree — crucified and obliterated. Unfortunately, even thoughted, the ghost of colonization still lingers in many spheres of the life and culture of the Ghanaian as though it were still the British in control. Indeed, they are stilling control. In this writing, I contend that the language of the Ghanaian is still in the chains of the slavery of colonization and has been super-imposed by the colonizers language. In effect, I believe that the minds of most Ghanaians today have been plunged under the slavery of colonization; almost every Ghanaian seems to believing under the anesthesia and hypnotism of language colonization. Over 250 languages are spoken in Ghana. The language of a people makes the fabric of a people. Any language lesson taught is culture learned. Before the coming of the European to the shores of Africa, and for that matter Ghana, the

African’s language was pure, virgin and unadulterated. Language spoken was what the people were. As the snake in the garden, seeking self-gratification and imperialism, theImperialists coaxed and gave to the African the fruit of her language to eat. However, upon all the ills of colonization, formal education was transmitted through the medium of the language of the imperialists. At least with that, it is kosher to say the African does owe appreciation. Having taught the Ghanaian to fish, the latter took unto himself the responsibility to take control of his own affairs —“the black man is capable of managing his own affairs” (Nkrumah, 1957).Unfortunately it is important to submit that colonization still lingers in the courts of the Ghanaian. I contend in this writing that the fruit of English Language which was given to the Ghanaian was not meant for anything than to probably help establish education to enlighten him —it was not meant to crumble the Ghanaian’s culture of language— it is unfortunate however, to realize that the latter is what has taken place in the eyes of all. The colonial master is gone but he has captured the culture of language in the pangs of his control. Elsewhere in the diaspora, it is really a difficulty for other nations to accept that Ghana is a native English speaking country. In reality, Ghana is not a native 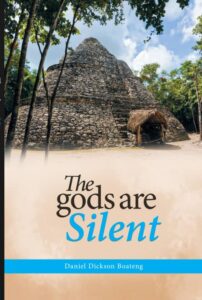 Gods Are Silent is Now Available Get Yours Now!! Dismiss